Q and A type interpretation

What is the purpose of a test of hypothesis?

A hypothesis test is a decision-making process that examines a set or sets of data, and on the basis of expectation under null hypotheses, leads to a decision as to whether or not to reject null hypotheses. Because in many circumstances we merely wish to know whether a certain proposition is true or false. The process of hypothesis tests provides a framework for making decisions on an objective basis, by weighing the relative merits of different hypotheses, rather than on a subjective basis by simply looking at the numbers. Different people can form differnt opinions by looking at data (confounded by chance variation or sampling errors), but a hypothesis test provides a standardized decision-making process that will be consistent for all people


Does hypothesis test ever prove a null hypothesis

When the probability is greater than 0.05 levels, we reject the experimental hypothesis. However this does not mean that the null hypothesis (no effect in the population) is true. Non-significant test results tell us that the effect is not big enough to be anything other than a chance finding and doesn’t tell us the effect is 0. As Cohen (1990), points out, non-significant results never be interpreted as ‘no’ difference between means ‘or’ no relationship between variables. He further points out that the null hypothesis is never true because from sampling distribution that two random samples will have slightly different means and even though these differences can be small, they are nevertheless different. Even small differences would be deemed as statistically significant if a larger sample size were used. So, hypothesis or significance testing can ever tell us that the null hypothesis is true.

What is a p value? What does the p-value mean in words?

The p value is the probability of getting values of the test statistics as extreme as or more extreme than, that observed if the null hypothesis is true. The p-value is usually compared to the predetermined significance level α to decide whether the null hypothesis should be rejected or not. In general, small p-value or p value less than or equal to α, we reject H0 while a large p-value or p is greater than α, we do not reject H0 or no evidence against null hypothesis. Many writers, when reporting conclusion in the research, prefer to report findings in terms of p values to report whether that an observed value of the test statistical significant

Briefly explain the relationship between confidence interval and hypothesis testing?

Under what circumstances might you use a one-sided test of hypothesis rather than a two-sided test?

When the alternate hypothesis does specify a direction, then one-sided test of hypothesis could be used. In general a one sided test hypothesis is appropriate when a large difference in one direction would lead to the same action as no difference at all.

Explain the analogy between type 1 and the type II errors in a test of hypothesis and the false positive and false negative results that occur in diagnostic testing.

Type 1 error or rejection error or an α error occurs when we believe that there is a genuine effect in our population, when in fact there isn’t or A type 1 error is made if we reject the null hypothesis when H0 is true and the probability of making type 1 error is determined by the significance level (Fisher’s Criterion = 0.05 or 5% chance) of the test. The opposite is a Type II error or a β error or acceptance, which occurs when we believe that there is no effect in the population when, in reality, there is or it is made if we fail to reject the hull hypothesis when H0 is false. These errors are made during decision process in statistics.

The false positive that occurs in diagnostic testing is also known as Type 1 errors and false negative is also called as Type II error or β error.

Solution: The mean diastolic blood pressure of the female diabetics between the ages of 30 and 34 is equal to the mean of the general population of females in the same age group. H0: µ = µ0 = 74.4mmHg

Solution: The mean diastolic blood pressure of the female diabetics between the ages of 30 and 34 is not equal to the mean of the general population of females in the same age group. HA: µ ≠ µ0 = 74.4mmHg

A sample of ten diabetic women is selected; their mean diastolic blood pressure is =84 mmHg. Using this information, conduct a two-sided test and the alpha level = 0.05 level of significance. What is the p-value of the test?

What conclusion do you draw from the results of the test?

Would your conclusion have been different if you had chosen alpha=0.01 instead of alpha= 0.05?

No my conclusion would not be different, even if I had chosen alpha = 0.01 instead of alpha = 0.05, since the difference observed is considered to be extremely statistically significant.

Null hypothesis: The mean white blood cells of the persons infected with E,Canis will be lower than that of mean of general population, The null hypothesis for the test is, H0: µ ≥ 7250/mm3

What do you conclude?

From the above results, sine p value is smaller than α = 0.05, we reject the null hypothesis and state that, the mean of white blood cells of the persons infected with E,Canis was lower than the that of mean of general population.

What is the probability of making a type 1 error?

In this case, we know that the null hypothesis is false, since the serum cholesterol level of the men who do not develop heart diseases cannot be higher than the mean level for men who do. If the tests of hypothesis lead us to accept H0, saying that there is no difference between the mean cholesterol, then we increase the probability of making a type 1 error.

If a sample of size 25 is selected from the population of men who do not go on to develop coronary heart diseases, what is the probability of making a type II error?

What is the power of the test?

How could you increase the power?

What is the main difference between paired and independent samples?

PairedIn paired sample, the sample is matched to a unique data point in the second sample, among the same population. Independent samples consider two or unrelated separate groups.

Explain the purpose of paired data. In certain situations, what might be the advantage of using paired samples rather than independent ones?

Paired t test are used to compare means on the same or related subject over time or in differing circumstances. The observed data are from the same subject or from a matched subject and are drawn from a population with a normal distribution. Subjects are often tested in a before-after situation (across time, with some intervention occurring such as a diet), or subjects are paired such as with twins, or with subject as alike as possible. 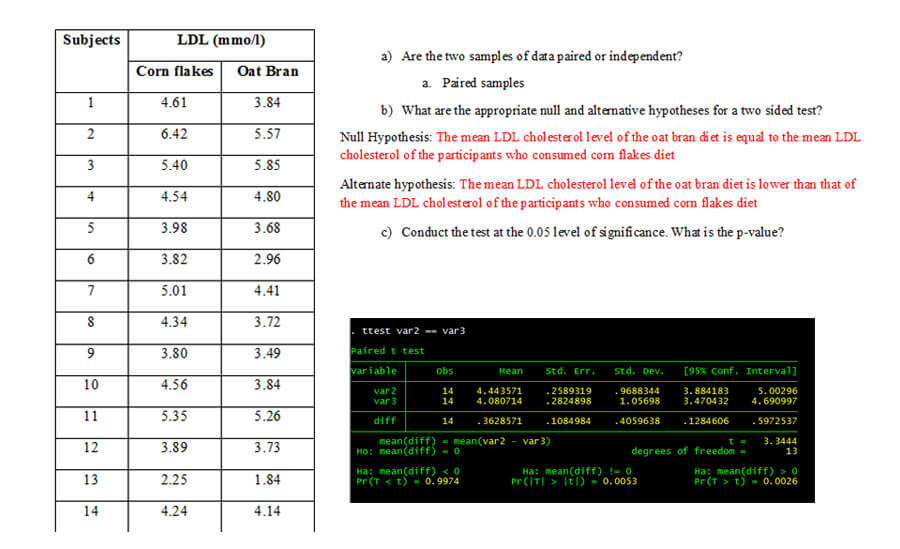