Conceptual framework is one of the analytical tools with several deviations and contexts. It is used to make conceptual variations and organize ideas.

Conceptual framework is one of the analytical tools with several deviations and contexts. It is used to make conceptual variations and organize ideas.

This section highlights the importance of understanding particular conceptual frameworks that underpin the use of ICT in education generally. The theories and models in this section will assist in understanding the development and success of blended online learning environments. The core to this research is the acceptance of ICT use in education. While early researchers sought to isolate the challenges of adoption of the technology itself, particularly in the pedagogical fields cantering either on teacher or student, the discussion now moves onward to the role of the internet, support media in the lecture, and mobile devices.

Theoretical modelling is used to study the acceptance rate of ICT, and this section briefly examines the evolution of innovation theory and the extant technology adoption theories and models to underpin technological adoption in Sultanate of Oman.

Davis (1989), who introduced the Technology Acceptance Model (TAM), argues that this model is an adaptation of social psychological theory of reasoned action. It is specifically designed to create user acceptance of information systems. Figure 1 shows that in order to use a technology, the major determinants are apparent usefulness and apparent ease of use in a technology. While the former refers to the level in which a person has a general belief that using the system will increase the task performance, the latter refers to the degree where the target system must be free of effort. According to Horst, Kuttschreuter and Gutteling (2007) and Venkatesh, Morris, Davis and Davis (2003), the most important determinant of behaviour intention in technology is studies that are studied abroad and perceived usefulness.

The user behaviour is explained by TAM across a wide range of end-user computing technologies and user population like text editor, spread sheet, e-mail, students, software professionals, physicians etc. According to the cultural context, the predictive power of TAM differs. Compared to the East (10-35%), its power of prediction is higher in the West which is (45-70%). According to Rose & Straub (1998) and Straub (1994), among all the cultures that are studied, perceived usefulness is the most important one. According to Dinev, Hu & Goo (2005), Mao and Palvia (2001) research in Asia and Africa are interested in the subjective norm while in order to explain its relevance in determining the behavioural intention to use computers subjective norm has been shown a particular interest.

Venkatesh and Davis (2000) studied the continued TAM model and developed TAM2. According to the aspects of social influence process and cognitive instrumental processes, they suggested the handling methods and the expected benefits. According to the social influence process, subjective norm, image and voluntariness, are the three inter-connected social forces influencing the person to accept or reject a new environment when facing a new situation. A person’s related job experience and the productivity are described in the cognitive instrumental process. The other basic determiners of user acceptance are results demonstrability and perceived ease of use.

Venkateshet al. (2003) developed the Unified Theory of Acceptance and Use of Technology (UTAUT), as given in Figure 2. Based on conceptual and empirical similarities over diverse technology acceptance models, UTUAT was derived. The theory suggests that user acceptance and usage of technology is described by four components. It includes effort expectancy, performance expectancy, social influence and facilitating conditions. 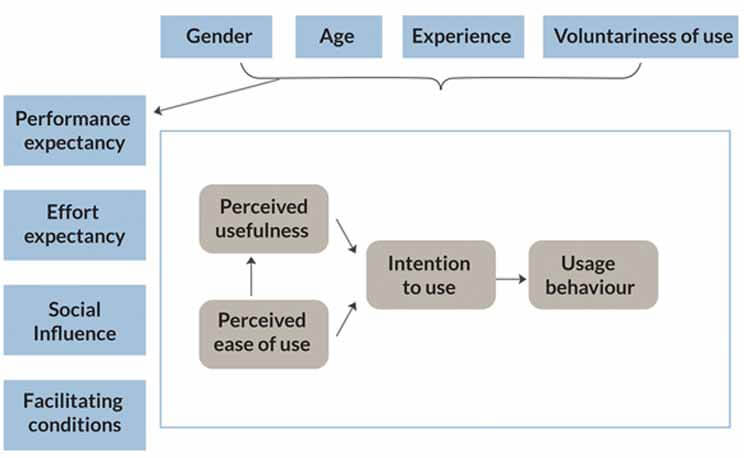 Performance expectancy is the greatest determiner of intention. It is the vital element for both settings of voluntary and mandatory in the entire terms of measurement. In terms of both voluntary and mandatory usage, the effort expectancy is the critical element. But, this applies only in the starting levels of adoption. Social influence is vital element in voluntary but this does not hold well in terms of mandatory. Moreover, facilitating conditions have a high influence over usage which was explained only by the behavioural intentions. A majority of studies on UTAUT is performed on the institutional staffs and includes job aspects of every determinant.