Obesity, its attendant health consequences and the consequent health burden, are expected to reach epidemic proportions in developing countries such as India, particularly in some sections of the population. Overweight and obesity in children and adolescents can no longer be considered as factors reflecting the economic development and the attainment of food adequacy in developing societies. Childhood obesity is the prelude to a public health disaster that we will have to deal with in this 21st century. The present thesis was done in an effort to test the hypothesis – Is there any significant influence of diet or its constituents in contribute to overweight or obesity in the adolescents. And if so are there any differences in the dietary pattern among adolescents coming from different household income levels. The results are summarized using the described statistical means and are described below.

Nutritional profile of adolescents based on household income

Table I:Basic Anthropometric and Nutrient profile of the adolescents based on Household income (n=200) 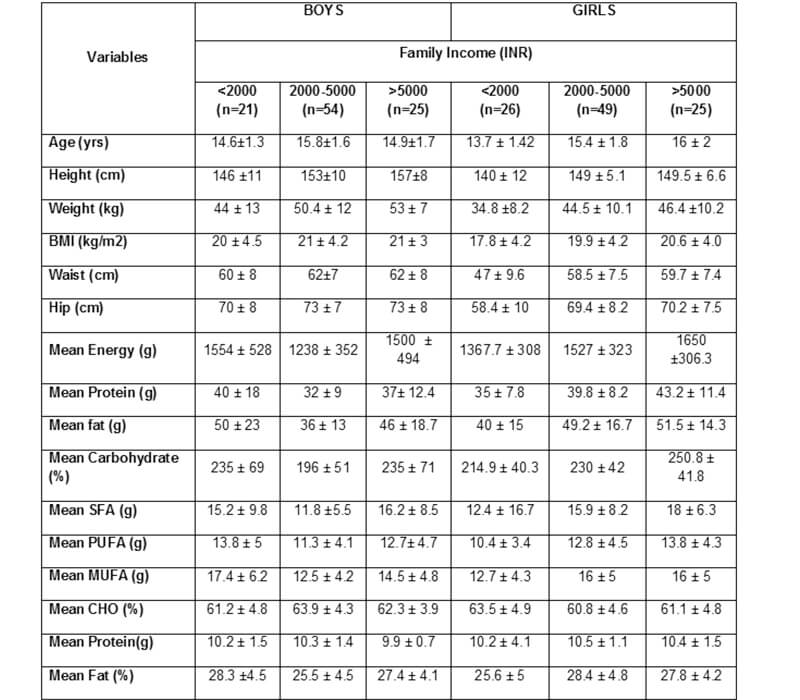 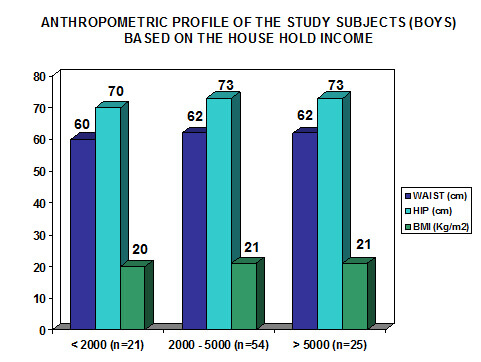 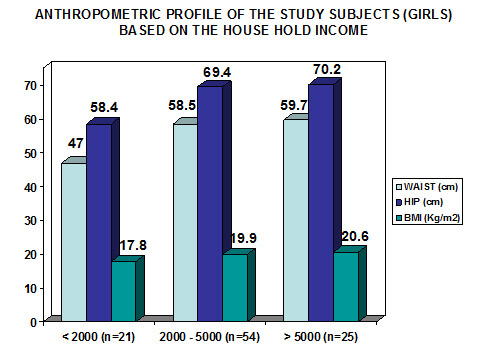 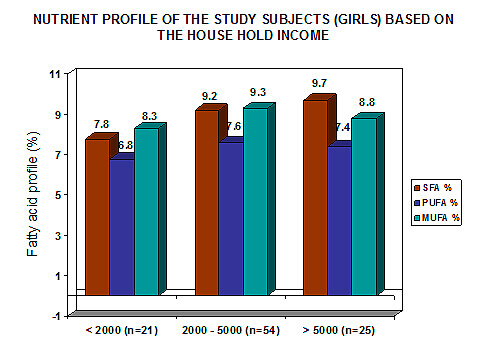 Table II : Anthropometric and nutrient profile of the adolescents based on the BMI cut off (below and above 85th percentile) 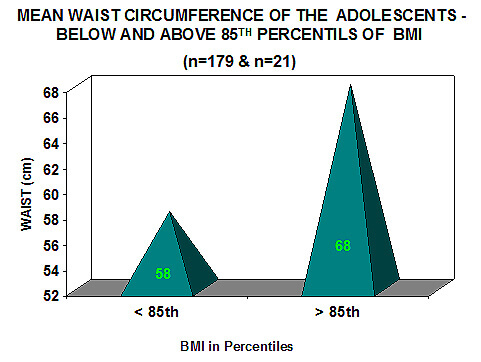 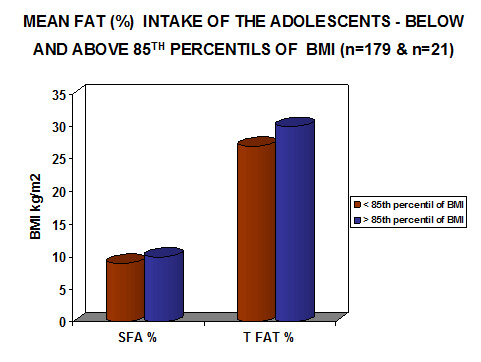 However there was decreased intake of carbohydrates as %calories by the overweight subjects (<85th percentile CHO% 63% vs 60% in >85th percentile). 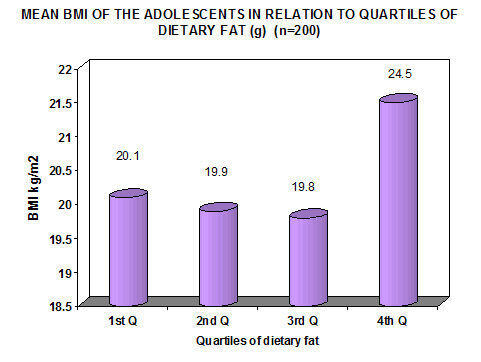 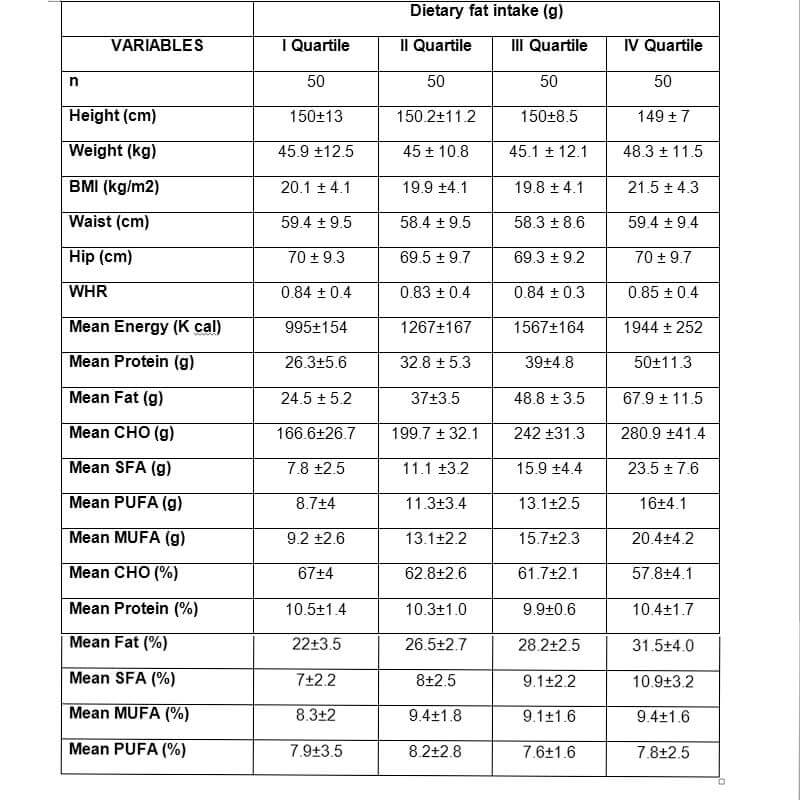 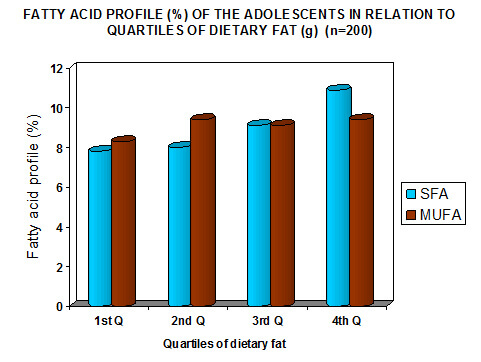 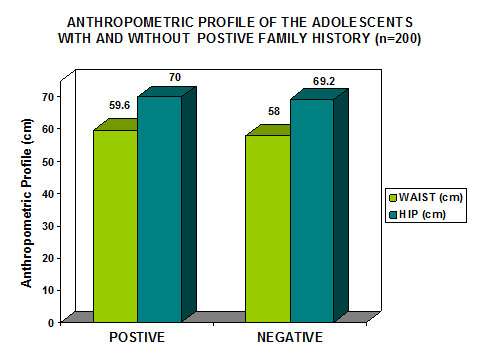 SELF REPORTED FAMILY MEDICAL HISTORY OF THE CHOSEN ADOLESCENTS (n=200) 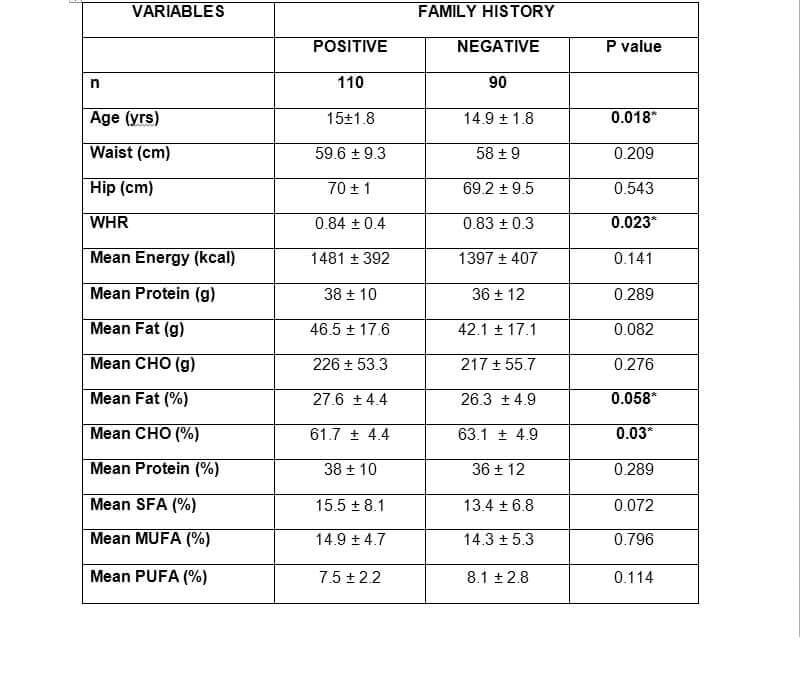 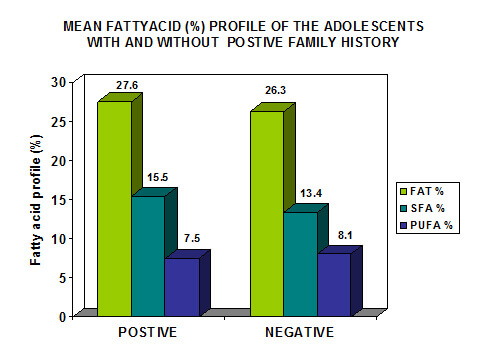 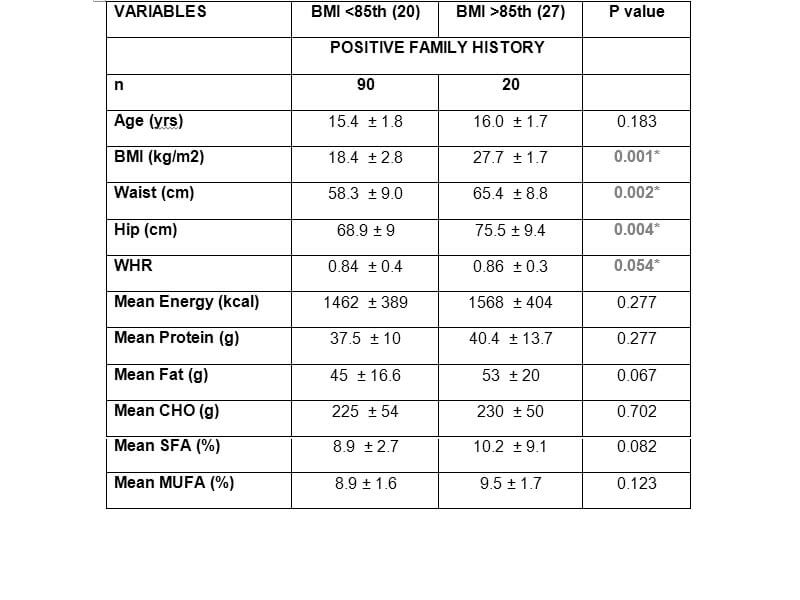 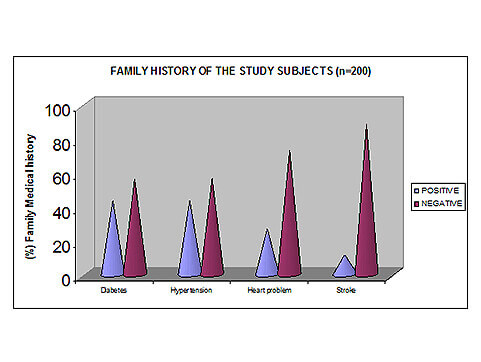 Studies by Anand, Tandon and Varma et al from northern India, noted that children with obesity had a high risk of hypertension. In low-income Mexican Americans, the prevalence of overweight in adolescence was 40.1% (Lacar, et al., 2000). A rising trend in the prevalence of obesity in childhood and adolescence has been noted in several studies (Chinn, et al., 2001;.Kromeyer-Hauschild, et al,1999). In Germany, obesity in children has almost doubled between 1975 and 1995 (Kromeyer-Hauschild, et al., 1999). Childhood obesity has important health consequences for children and is a major antecedent of adult obesity (NIH 1995). Several studies have demonstrated the persistence of childhood obesity into adulthood (Serdula, et al., 1993; Siervogel, et al., 1991). The likelihood of adult obesity is greater for obese adolescents (Guo, et al., 1994). Obesity is also associated with abnormal lipid profiles during childhood and adolescence. Other early stages of chronic diseases also relate to obesity, as do increased morbidity and mortality (must et al 1992). Among U.S adolescents aged 12-17years, the level of obesity was relatively constant throughout the 1960s and 1970s but has shifted upward then. (Troiano, et al., 1995) showed that, between the years 1976-1980 and the years 1988-1991, the proportion of adolescents above the 95th percentile more than doubled.

More recent results showed that there was a significant increase in the obesity pattern for adolescents between the first phase of NHANES III (1988-1991) and the second phase (1991-1994) (Popkin,1994; Richard Udry, 1998). Prevalence of overweight was associated with lower physical activity score and higher economic status (Ramachandran, et al.,2002). The present study though did not find the prevalence but did find the mean BMI increasing with increasing household income. The study also found that as affluence increases the dietary fat intake also increased especially saturated fatty acid (SFA- Fig III)

(Moussa, et al., 1999; Musaiger,etal.,1993). had noted that a family history of obesity and diabetes were risk factors for obesity in children. Though the present study did not aim at this, it however observed that adolescents with <85th percentile and with positive family history of diabetes had higher BMI, WHR and also consumed higher total dietary fat and especially saturated fats (SFA) (Table 5)

The present study has highlighted that obesity an emerging problem in adolescent children is likely to be associated with the possible dietary fat intake especially the saturated fats. Overweight and obesity are, however difficult to correct after becoming established, and there is an established risk of overweight during childhood persisting into adolescence and adulthood (FAO,1996). It is increasingly recognized that unhealthy lifestyles do not just appear in adulthood but drive the early development of obesity, dyslipidemia, high blood pressure, impaired glucose tolerance and associated risk. Increased availability of fast foods and faulty eating habits especially fatty food choices have taken place over 30 years. At the same time, the amount of physical activity has been greatly reduced both at home and in school, as well as by increasing use of mechanized transport.

However, the present study had many limitations owing to the time constraint for a detailed study. Hence the present study recommends that further studies are needed to cover wider adolescent population and also to find out the prevalence of overweight and obesity across the various socio economic levels.

About 25% of children are overweight or obese, according to newly established national criteria. These teens are at significant risk for becoming obese adults, and adolescent. Obesity predisposes to a range of medical problems like cardiovascular disease and diabetes. The reason for these alarming changes is due to increasing westernization, urbanization, and mechanization occurring in most developed and also in developing countries around the world is associated with changes in the diet towards one of high-fat, high-energy foods and a sedentary lifestyle (physical inactivity)

Hence, the study was undertaken with the main objective as to assess the Nutritional profile of the adolescents and – it’s implication on health risk. This study was conducted in the city Corporation managed and the other is the private school. To have wider variety in the standards of living, adolescents from a government school and a private school were selected, the subjects were selected based on the convenience of the interviewer and the sample size being 200. The study subjects were divided into two groups as 13-15yrs (50 boys and 50 girls) who were in the high school and 16-18 yrs (50 boys and 50 girls) who were in the higher school level and under graduate level, the subjects were randomized equally from both private and government school. The study was conducted with the help of 24hrrecall and open ended questionnaire to obtain require data. The collected data were analyzed systematically and concluded as follows:

Studies suggest that individuals who were in the 2000-5000Rs and >5000 RS income group had higher level of BMI, WHR, dietary fat and saturated fats. The total fat intake and saturated fatty acid were increased both boys and girls across all the income level but no significant increase or decrease in the protein intake across the income group of both boys and girls were found.

Studies shown that fat intake is directly associated with coronary artery diseases (CHD). In the present study Waist circumference and BMI was high increase with 1st and 4th quartiles of fat. Saturated fatty acid also increases with the increase in quartiles of fat intake.

Studies shown that the risk increases with the subjects of positive family history. In the present study overweight subjects with the positive family history had higher waist and hip circumference than normal weight. Mean fat intake (g), percentage of saturated fatty acids and monounsaturated fatty acids from total calories was higher in the overweight subjects than with normal weight.

Thus it is noted that increasing urbanization, changing lifestyle, increased intake of saturated fat and genetic predisposition might be the reason behind the increase in overweight and obesity in adolescents. Thus Education about the long-term health consequences and risks associated with overweight and how to achieve and maintain a preferred weight is necessary. While many individuals attempt to lose weight, studies show that within five years a majority of them regain the weight. In order to maintain weight loss, good dietary habits must be coupled with increased physical activity, and these must become permanent lifestyle changes.