The theoretical framework must reveal an understanding of theories and concepts that are related to the topic of our research paper.

For ex., Theoretical Framework for the Study

There are several models have been identified for adoption of technologies such as to predict adoption and usage behaviour (as discussed in the previous section). In order to predict the individual adoption of technologies, models like Theory of Reasoned Action (TRA), Technology Acceptance Model (TAM), Technology of Acceptance (TAM) (Venkatesh et al., 2003; Fishbein & Ajzen, 1975), Theory of Planned Behaviour (TPB) and Unified Theory of Acceptance and Use of Technology (UTAUT) (Venaktesh et al., 2003) had been widely used and validated tested by several researchers. The present study utilized UTAUT model which was proposed by Venkatesh et al. (2003) due to its high prediction of individual adoption behaviour of information technology innovation in comparison to other models (Moran, Hawkes & Glayer, 2010). Further recently, Khan and Iyer (2009) proposed another construct ELAM model for specifically e-learning acceptance. However, this model was validated only by few researchers (Lin, Lu & Liu, 2013).

In the present study context, researcher developed the model based on the ELAM and UTAUT, named as Blended Learning Acceptance Model (BLAM). This is because, the existing ELAM was developed for e-learning specifically and secondly, actual usage was removed as implementation of blended learning in Sultana of Oman is at earlier stage. Further, the model was also included demographic variables as a moderator to predict the adoption behaviour. The model consists of four constructs namely effort expectancy, performance expectancy, facilitating condition and social influence which are direct determinants of behavioural intention. Demographic factors such as gender, age and computer experience was used as moderating variable while learning style of students was used as mediating variable in the present study. Finally, in terms of Sultanate of Oman, there are no studies that summarize the behaviour of both students and teachers in the foundation of eLearning acceptance. 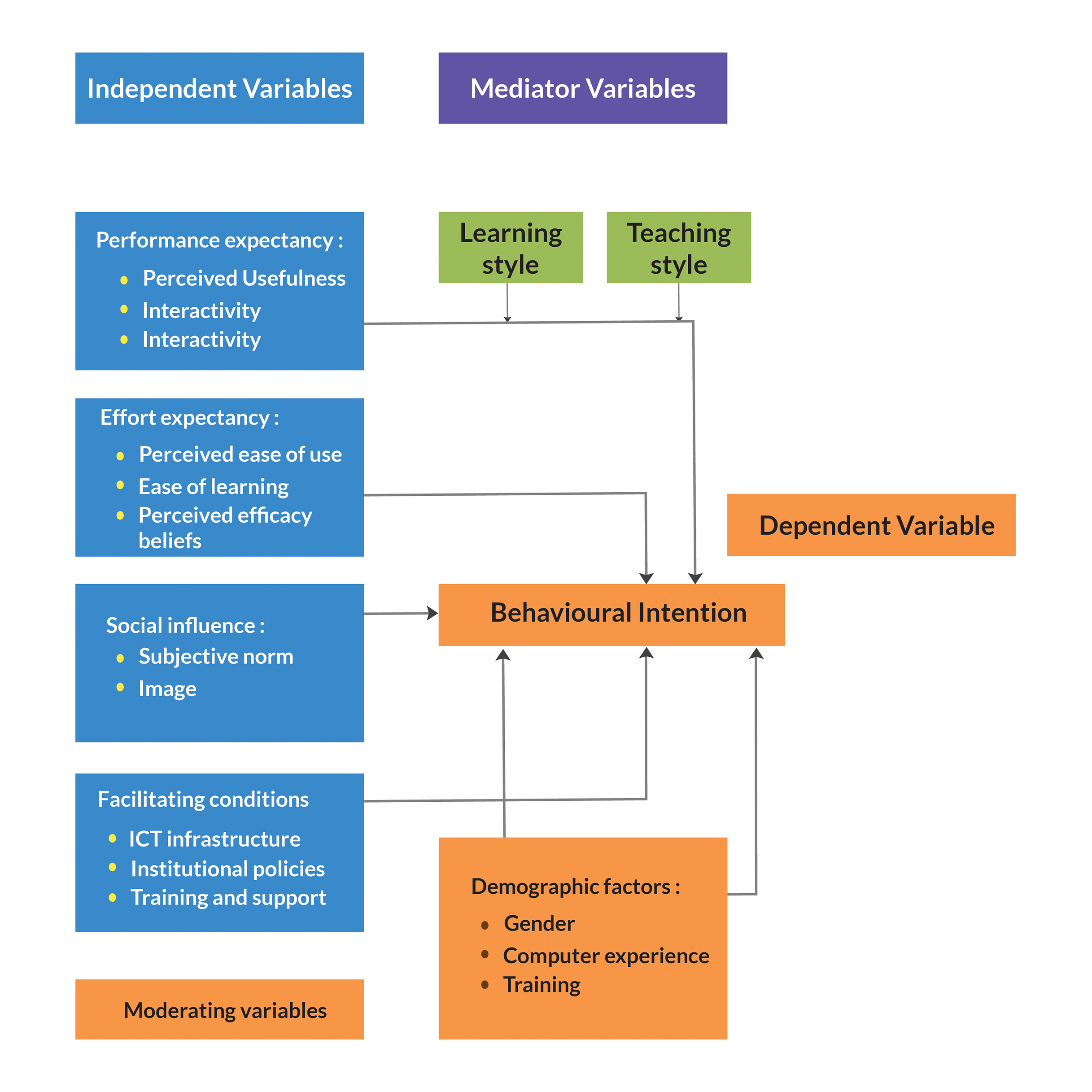 In this context, we combined the Unified Theory of Acceptance and Use of Technology (UTAUT) to model, and the ELAM (eLearning acceptance model) specifically for blended learning context considering the background of Sultan of Oman where implementation and usage is still at an infancy stage. The model is named as Blended Learning Acceptance Model (BLAM) where Effort expectancy, performance expectancy, social influence and facilitating conditions are the fundamental determinants. This model considered that the individual’s interest is the important action determinant, since the acceptance of blended learning in the process of teaching-learning is controlled by the voluntary behaviour.

The appropriate use of technology is found by the behavioural intention in addition to favourable conditions. Since the blended learning depends on the personalization of process of teaching and learning, both the student’s learning technique and the teacher’s teaching technique play an important role in the acceptance process. These features are determined to be mediators influencing the association between performance expectancy beliefs and behavioural intention in the usage of blended learning. Figure 1 depicts the model adopted for blended learning at CAS.