The research methodology is considered as a blueprint for a research study which encompasses several research activities, description of procedures, formulations to access the growth and development and various other success-related factors. Enabling to evaluate and assess the collected data, research methodology acts as a reference outline in order to make sure that the collection and evaluation of the collected information is done appropriately to achieve the study’s objective (Sekaran, 2003). The chief aim of this section is to present an outline of the investigative plan that was utilized by the investigator while preparing this thesis, endeavoring to ascertain the part of leadership on job results so as to give validations for the method utilized in this research. This section elaborates in detail the investigative procedure taken up and further provides a detailed account of the information gathering and information assessing methodologies utilized by the investigator with the inclusion of validation for the techniques and methodologies utilized.

The section commences with the outline of the investigative plan and elucidates the utilization of the plan and philosophy by the investigator. The section explains the study intent, the investigative methodology utilized, the populace that is targeted, the sample size of the study, the method used for the sampling, tools used in the study, legality and dependability of the survey questionnaire and moral concerns. Talking about the methodologies utilized in this investigation, it is further essential to taken into account the basic intention of the investigation and the investigative method suitable for the investigation (Punch, 2005). This section further elucidates and validates the use of sampling methodology utilized and justifies employing normal data for taking up statistical study. The sources of primary and secondary information are clarified with relevant rationales. The compilation of the thorough questionnaire and the procedure utilized are explained in this section followed by the reliability and validity tests.

The research mainly focuses on analyzing and comparing the marketing strategies adopted by Apple Inc. for its iPhones in the developed markets of US and the developing markets of India. The research arranged following Saunder’s Onion Model (2009) as can be seen from the Figure 2 shown below: 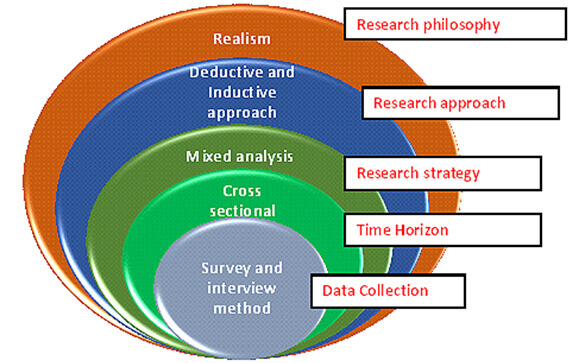 This is an apt model for analyzing the marketing strategies adopted by Apple iPhone in US and India. Moreover, this would be an exploratory research that would be qualitative in nature because it provides a flexible framework; however the research lacks a formal empirical analysis (Thomas, 2006).

The answer given for the research question in this research methodology is pointed out through examining several hypotheses. Sources procured from preceding literature are studied to evaluate different hypothesis depending on the background of the study. This is superseded by the conception of research theory which executes to be the theoretical framework. Marcoulides (1998) stated that the systematized research hypothesis is then examined to evaluate and determine the research theory so as to reach the conclusion. The deductive approach is considered as a top-down approach.

The methodology employed in the inductive research is contrary to the deductive methodology. In general, inductive research methodology originates with the assessment of the collected information which eventually paves the way for the formulation of the research theory. The hypothesis is further processed depending on the developed theory. Therefore, this approach would enable in designing theories and conceptions depending on the previous developed experimental data (Marcoulides, 1998). The inductive is known as bottom-up approach. 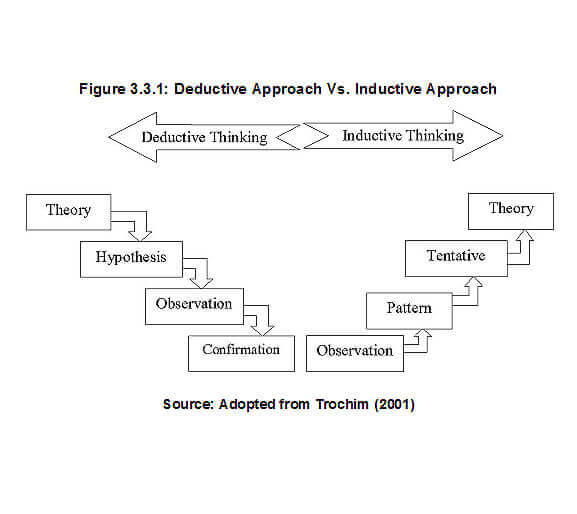 In quantitative research, the researchers maintain a separate, open-minded view in order to understand the reality (Duffy, 1986). In this research, qualitative methodologies also have supposed strengths and weaknesses with respect to the closeness of the relationship between respondent and researcher. Duffy (1986) argued that strength of this interactive relationship is that the investigator acquired first-hand experience giving useful, meaningful data. As the researcher and the subject spend more time together the data are more likely to be valid and honest (Bryman, 1988). This approach implements data analysis or questionnaire process which encompasses in designing graphs or tabulating statistics to collect the numerical data.

As per the statement of Albert Einstein, the qualitative approach is “Not everything that can be counted counts, and not everything that counts can be counted”. This research approach is efficient in attaining culturally particular data about the opinions, social contexts, values and behaviours of specific populations and also effective in determining intangible factors namely ethnicity, gender roles, religion, socio-economic status and social norms. The qualitative approach adopts data analysis or interview process (classification of the data) in order to gather the non-numerical data. Some examples of qualitative data include non-verbal data like videos or images (Saunders et al., 2003). The present study adopted the Qualitative approach.

The target population would be working people as well as students that belong to both sex male and females from the USA and India.

For collecting relevant data for the research, a sample size is needed that finally give us primary data for research and help in reaching the final conclusion. A convenience sample be drawn from the numerous respondents who are either studying or are employed (Creswell, 2007). Using random sampling, a sample population of 200 respondents is chosen. The chosen sample size for the research would be total 200 people 100 people living in The US and the other 100 living in India. Since the main aim of the study is to find out the opinion of people in relation to the marketing strategies adopted by Apple Inc. in relation to iPhone in India and US, the respondents should possess at least moderate or high level of knowledge about the product and the company. Thus, the sample can be called a homogeneous sample (Guest et al., 2006).

Primary data: It is the first-hand information for any problem or the highly specific information that is collected directly either through research or through observation (Kotler et al., 2005). In this case researcher use survey questionnaire method for collecting primary data from the views of respondents regarding the regarding the branding and the marketing strategies that are used by Apple for its iPhone (Creswell, 2007).

Survey method is the most often used method for collection of primary data as this technique is betted for collecting detailed information moreover it is very flexible as well. It helps in obtaining different types of information, that too in different situations (Kotler et al., 2009). Target groups need to be selected by the researcher in this case for asking the questions regarding their attitudes, preferences, knowledge as well as behavior. Thus to collect information about the marketing strategies adopted by Apple Inc., a survey questionnaire be designed for collecting information or data.

The method of collecting data for the research on marketing strategy used by Apple for iPhones is on-line questionnaires that contain all the close-ended questions with set responses (University of Wisconsin, 2012). This survey instrument is cheaper, covers a large geographical area and takes very less time as compared to other instruments

Stage 2: The propositions derived from stage 1 be used for designing an on-line survey questionnaire that be distributed to the sample size of 200 respondents in both US and India. The sample size is collected through the Google survey link. The sample has been developed on purpose so as to reach the knowledgeable people (Saunders et al., 2009). The survey would be administered online and sent by email. The s

Stage 4: On the basis of the data analysis results, the inferences be drawn so as it give possible recommendations in the end

Structured interviews are a means of collecting data for a statistical survey. In this case, the data is collected by an interviewer rather than through a self-administered questionnaire. Interviewers read the questions exactly as they appear on the survey questionnaire. The choice of answers to the questions is often fixed (close-ended) in advance though open-ended questions can also be included in a structured interview. A structured interview also standardizes the order in which questions are asked of survey respondents, so the questions are always answered within the same context. This is important for minimizing the impact of context effects, where the answers given to a survey question can depend on the nature of preceding questions. Though context effects can never be avoided, it is often desirable to hold them constant across all respondents. The present study adopts structures interview questions that are given in Appendix 1.

This is the data collected from secondary sources and is the second-hand data collected from sources like articles, journals, books, etc. (Kotler, 2005). The secondary data sources that be used for collecting data would be trade journals, magazines related to marketing and marketing management journals, articles, books, newspapers and various authentic websites. The reason for collecting the secondary data is that it is readily available, and it also helps in supporting the primary data, thus aiming the data available more specific as it helps in uncovering the gaps and the deficiencies in the information that needs to be collected.

At the concluding phase of the explanatory study method, a sample investigation was carried out. The survey questionnaire should be assessed by way of the sample research prior to being executed amongst the populace (Saunders et al., 2003). The chief intent of the sample study is to guarantee that participants are not subjected to difficulties during the investigation. The questionnaire prior to being employed for gathering information could be enhanced utilizing the findings got from the sample or pilot study. Sample research further offers the authenticity for the questionnaire to be employed (Saunders et al., 2003).

The questionnaire was modified by the investigator by way of the comments received at the conclusion of the study method by the respondents, but the queries drafted were not changed. Alterations were made pertaining to the length of the questionnaire like changing the font size and line spacing.

The data would not be manipulated as per researchers and all the sources from where data is collected are duly acknowledged. In order to handle the data quality issues, a framework be developed that would not be biased and avoid any types of errors (Bryman, et al., 2007) . The researcher makes sure that all the data sources are visible, and they be properly referenced so that the quality of the study is not being compromised. Ethics is maintained and taken care of all through the research study and since it involves gathering data from various sources full confidentiality as well as accuracy is adhered to (MCMILLAN, et al., 2007) .

The present study adopted qualitative approach with the structured interview questionnaire. The target population would be working people as well as students that belong to both sex male and females from the USA and India. The chosen sample size for the research would be total 200 people 100 people living in The US and the other 100 living in India.